Dance the Moon Down – R.L.BARTRAM 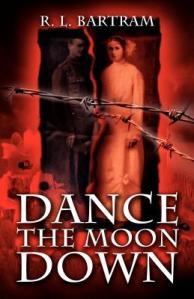 Dance The Moon Down is written and published by R.L.Bartram

In 1910, no one believed there would ever be a war with Germany. Safe in her affluent middle-class life, the rumours held no significance for Victoria either. It was her father’s decision to enroll her at university that began to change all that. There she befriends the rebellious and outspoken Beryl Whittaker, an emergent suffragette, but it is her love for Gerald Avery, a talented young poet from a neighbouring university that sets the seal on her future. After a clandestine romance, they marry in January 1914, but with the outbreak of the First World War, Gerald volunteers but within months has gone missing in France.
Convinced that he is still alive, Victoria’s initial attempts to discover what has become of him, implicate her in a murderous assault on Lord Kitchener resulting in her being interrogated as a spy, and later tempted to adultery. Now virtually destitute, Victoria is reduced to finding work as a common labourer on a run down farm, where she discovers a world of unimaginable ignorance and poverty.
It is only her conviction that Gerald will some day return that sustains her through the dark days of hardship and privation as her life becomes a battle of faith against adversity.
I was approached to review this book and told it wasn’t your normal WW1 war story, this was a love story. This in its self made me want to read it.
What R.L.Bartram has written is truly a beautiful, heartfelt account of one ladies WW1 experience. It is so detailed and gripping that you are transported to that time and can smell, feel what is going on around. Victoria and Gerald have everything they could possibly want, each other and are blissfully happy until war breaks out. Gerald does what every decent man would do and enlists. Within such a short period of time, he goes missing and Victoria can’t let go, the love she had for him just won’t allow her.
This really is a wonderful book that I couldn’t put down. I think I read the 300 pages in a day. Beautifully written, packed with drama, elements of humour but wrapped up with fabulous emotion. I can’t help thinking that this is actually someones true story. This really is a self published book worth reading.
Available in paperback and kindle versions via Amazon UK  Dance the Moon Down